The Ishasha sector of Queen Elizabeth national park is known for its tree-climbing lions. Climbing trees is an unusual behavior for these big cats, there are only two locations in Africa where lions are known to have the habit of regularly climbing trees and Ishasha is one of them. It is not known why they climb the trees but it is for sure an impressive sight to see a fig-tree with a big lion resting on a branch. Stay with us at Topi Lodge so that you are close to Ishasha and can head out for an early morning game-drive to search the fig-trees for lions.

A game-drive here has the highlight of searching the big fig-trees for lions but also offers Uganda kob, topi, buffalo, elephants and more. Along with the animals you can also spot birds and beautiful nature.

Entry fees Ishasha: Uganda Wildlife Authority charges park entry to Queen Elizabeth National Park per 24 hours. For adults it is 40 us dollar, children from 5 to 15 years pay 20 us dollar and children under 5 years enter for free.

Located on the furthest end of the equatorial belt Ishasha is a magical spot bordering close and distant conservation areas like Parcnationale de Virunga, KahuziBiega, Maiko National park, Bwindi impenetrable forest and the expansive juicy side of Queen Elizabeth national park. A drive in this area is very adventurous given its great geographical landscape in shape of a Giant trench with picturesque terrains which inhabits extra ordinary animals most travellers long to see! From the Greater order of Primates, including The Great Apes revered by Great Primatologist and National Geographical explorer Jane Goodhal , the Chimpanzee- to the national Animal of the Region- The “Tree Climbing Lions” the area which is a great focal point on the globe for the Wildlife Conservation Network(WCN) in the support for the Lion Recovery Fund (LRF).

The Ishasha sector is gifted with nature ranging from great breeding herds of Elephants along the Edward flats an off circuit area off the beaten track of the remotest game tracks here! This area is a home for passage migrants in the bird world as millions of song birds, storks,waders and raptors from the eastern migratory flyway lead South and back to northern most part of the globe for breeding. In terms of birdlife, Ishasha still yields and will continue peeling rare sitings of avian life with the Terek Sandpiper, Grey plover, the rare Blue Quail with top food chain birds like Africa’s most spirited eagle the Martial Eagle and the Lappet-faced Vultures have enough field of plains to soar and perch. Drives along the northern circuit connect the Ntungwe middle circuit like an arc engulfing Topi herds, Kobleks and Hyaena dens… with great buffalo herds grazing the rich pastures on top of the slopes continuing towards the Edward flats, these herds attract parasites like the Yellow-billed Oxpeckers and great flocks of Wattled Starling super stunners during the breeding season with extensive yellow and black skinand wattles in males, is something in males.

Continuing towards the information center, time invested in sloping towards the Ishasha river campsite can yield relaxed Hippo pods vocalizing with a rich voice perhaps communicating to the viewers that your moves are highly watched! This camp is a carpet to the canopy of tropical forest fringes of Congo and the Maramagambo forest as it dots the Lake Edward shores and woody sectors dotted in the grasslands. Some special nights here can reveal hidden rare sights Serval cats, Aardvarksand the shy Red river hogs since Ishasha has a bit of the Guinean and Congolian forests patches with no time to recognize the superb colour profile the Red river hog, the orange reddish brown and white markings are hard to miss.

With wildlife excursions in Africa going deeper, this area is a highlight yet visited by the global travellers. Among the great symbols of wildlife lovers, the transitional habitats in this Wildlife zone for ages, has produced billion of magical moments and the sky is still counting…. Its totally unusual to drive through Ishasha, the annexed Kigezi reserve and miss out on the African Civet cats, Leopard, Owls and Nightjars among many nocturnal member with the latter rich birdlife that rewards even the keenest twitchers.

The biggest magnet yet bringing numbers in Uganda are undoubtedbly the mountain Gorillas followed by Dian Fossey’s 18 year study after George Schaller, the resident Big cats here are a sight to behold with the Tree Climbing Lions becoming an identity travel dream to many. The southern circuit of the sector becomes the hot point with a host of well spaced big fig trees among the 47 species recorded in Uganda these figs have become very special species as they offer a great cover, vantage spot and super resting place for the remaining prides of Panthera Leo whose status is vulnerable since 1996 after a decrease of nearly 50% in 20yrs. The world’s rarest prides of these tree climbing Lions feed on the Buffalo, Topi and ever breeding herds of Uganda Kobs and a campaign to save them is highlighted by the Wildlife Conservation society work on attaching collars to active members of the prides to track the feeding ranges on data, recovering snares in the park and sensitizing communities which the management of Topi lodge with conservation owner continuing to cover more base by integrating poachers who for long have been indulging in the act for survival and now proud of reforming. 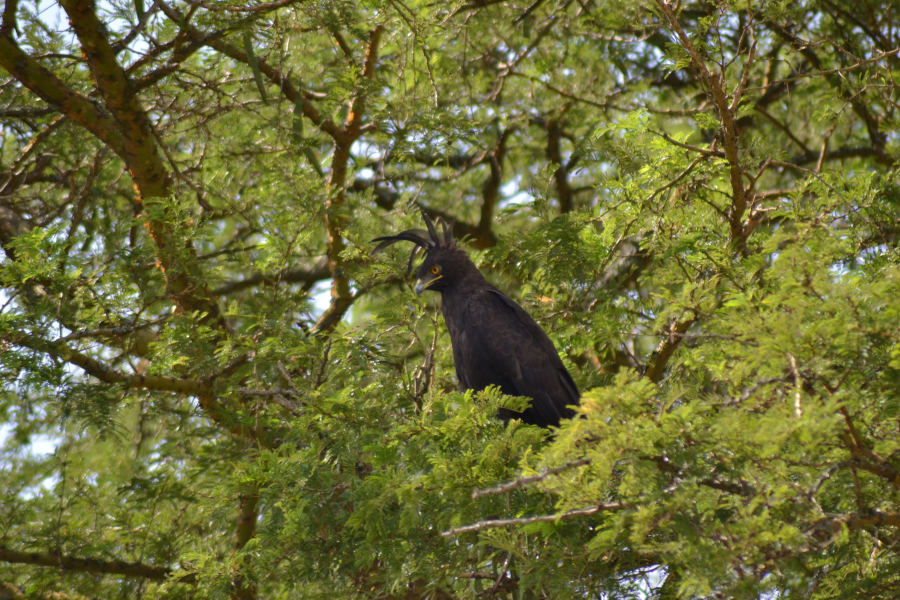 For a birder there are some specialities to keep an eye out for in Ishasha. Here we find savannah birds with the top vulture of the region Lappet faced vulture, Africa`s most spirited eagle the Marshal eagle, larks and can try to tick off the rare Dusky blue flycatcher on River ishasha. If you are on a Uganda birding safari a stay with us at Topi Lodge gives you the chance to explore Ishasha's birds.

The Ishasha reformed poachers association whose brain child Topi lodge by Ishasha have embarked on total training, helping and denouncing politely this act with offering sustainable survival skills and polishing super talented members into lodge building, helping in construction from unskilled to skilled needs like furnishing the lodge with locally sourced natural material, giving logged fig trees, Albizhia new life by erecting them for nesting barbets, starlings, woodpeckers, mats for ceilings, crafts and learning recycling techniques. The Ishasha reformed poachers association launch day in July 2019 after just a few months of hatching yielded lots of poaching field crafts like snares, traps, spears and positive energy by new members which popped out during the day after realizing that no sinister moves where laid in a move to give up a long long surviving act which has been fought by the deadly Kalashnikovs.

In Ishasha Topi lodge area a night triggers wailing spotted hyaena troops as the patrol the southern trees from any suspecting carrion left over either as a result of road kills or top predators with punctuation of Lion roars which can be heard across this magnificent Giant animal trench. Boma fires in ishasha area yield superb opportunities for anybody who loves the solar system by a great impressive display of the Milky way and other members of the Galaxy! Ishasha hot spot is a hub for travellers headed from or to Bwindi Impenetrable forest through a longitudinal connection towards the nearest Parks like Kibale forest and its attached across the five rivers will remain a highlight to departing and hit to more arrivals increasing every other year.

STAY WITH US AT TOPI LODGE WHEN EXPLORING ISHASHA

Location: At the edge of the Ishasha sector of Queen Elizabeth NP. 3,5 km drive from the southern gate to Ishasha in the direction of Kihihi. Search for Topi Lodge Ishasha on Google Maps.